Explore Royal London thought it's green and open spaces. WALK LONDON's Royal London Walk passes many of central London's historic and prestigious royal palaces, households and other related attractions, most of which can be visited.

Starting at St James's Park underground station the entire walk is through parkland and gardens. Follow in the footsteps of King Charles II and walk on 'royal soil' from Westminster to Kensington ending in tranquel Italian Gardens.

For your comfort WALK LONDON's self-guided walking tour passing many cafes and refreshment facilities. Take a picnic and make a day of it!

Three royal palaces border St James's Park. The most ancient palace is Westminster, now known as the Houses of Parliament. St James's Palace with its Tudor style, still holds the title of the "Court of St James" despite the fact that the Monarch has lived in the third palace, Buckingham Palace since 1837. Watch the wildlife officers feeding the pelicans every day at 2:30pm.

Built between 1531 and 1536, St. James's Palace was a residence for Kings and Queens of England for over 300 years. Today the palace, which is not open to the public, is still home to several members of the Royal Family and often in use for official royal functions. Since the accession of Queen Victoria in 1837, the Sovereign has lived at Buckingham Palace.

THE MALL and CLARENCE HOUSE

The Mall is the coloured road which looks like a giant red carpet running from Admiralty Arch to Buckingham Palace. Clarence House was built to the designs of John Nash for Prince William, Duke of Clarence. He lived there as King William IV from 1830 until 1837. Clarence House is the official London residence of HRH The Prince of Wales and The Duchess of Cornwall.

Buckingham Palace has served as the primary London residence of Britain's sovereigns since 1837. Originally build by the Duke of Buckingham, it has 775 rooms including 19 State rooms and 52 Royal and guest bedrooms. Used by The Queen for official events and receptions, the palace is furnished and decorated with priceless works of art from the Royal Collection.

THE QUEEN'S GALLERY and ROYAL MEWS

The Queen's Gallery, next to Buckingham Palace holds regular exhibitions and permanent displays of art from the Royal Collection.

One of the finest working stables in the world, The Royal Mews provides horse-drawn and motor transport for the Queen and other members of the Royal family.

Constitution Hill is the official route that connects The Mall with Hyde Park Corner. Wellington Arch, moved to its present site in 1882, was originally commissioned as a grand outer entrance to Buckingham Palace. The spectacular sculpture surmounting the arch is the largest bronze sculpture in Europe, depicting the angel of peace descending on the chariot of war.

The London home of the Duke of Wellington where he lived after his victory over Napoleon at the battle of Waterloo. The interior has changed very little over time and houses one of the finest art collections in London including Velazquez, Rubens and Canova's massive nude statue of Napoleon as Mars the Peacemaker. Open to the public, it is run by English Heritage.

HYDE PARK and THE SERPENTINE

Hyde Park is one of London's finest landscapes dating back to the 16th Century, when King Henry VIII used it to hunt deer and wild boar. Today it is a magnificent Park in the heart of London with lakes, meadows, tracks, bridle ways and over 4000 trees. The Serpentine lake, created in 1730, is the earliest example of an artificial recreational lake design to look natural.

Her Majesty The Queen opened the Memorial to Diana, Princess of Wales on 6th July 2004. The design aims to reflect Diana's life with water flowing from the highest point in two directions into a calm pool at the bottom. The water is constantly being refreshed from London's water table. There are three bridges where you can cross the water and go right to the heart of the fountain.

The Serpentine Gallery is one of London’s best-loved galleries for modern and contemporary art with exhibitions from emerging and established artists of our time. The two free galleries, Serpentine and Serpentine Sackler are located either side of the Serpentine Bridge.

The Albert, Prince Consort Memorial is one of the grandest high-Victorian gothic extravaganzas anywhere in the world and celebrates Prince Albert's passions and interests. Marble figures representing Europe, Asia, Africa and America stand at each corner of the memorial. Higher up are figures representing manufacture, commerce, agriculture and engineering.

The Royal Albert Hall is a Grade I Listed building and has been in continuous use since it was opened in March 1871. It was built to fulfill the vision of Prince Albert (Queen Victoria's consort) of a 'Central Hall' that would be used to promote understanding and appreciation of the Arts and Sciences. Wagner, Verdi and Elgar have conducted their own works on its concert platform.

Kensington Palace has been a residence of the British Royal Family since the 17th century. Originally built in 1605 it was significantly improved by Sir Christopher Wren from 1698-1718. Home to Diana, Princess of Wales and birthplace of Queen Victoria, it is now the official residence of Prince William and Kate Middleton, The Duke and Duchess of Cambridge.

Created in 1735, the Round Pond has avenues of trees radiating out, each giving a different view of Kensington Palace. Peter Pan flew from his nursery to live in Kensington Gardens. A bronze statue is situated where he landed, next to the Long Water, at site chosen by J M Barrie.
End our Royal London Walk in the tranquil Italian Water Gardens. 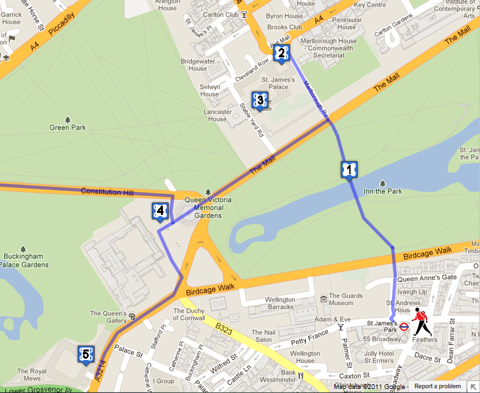 START at St James's Underground Station. Come out of the station at the BROARDWAY AND PARK EXIT. Walk straight across the road into QUEEN ANNE'S GATE SW1and continue straight on crossing BIRDCAGE WALK SW1 into St. James's Park.

On entering St. James's Park continue straight ahead following the footpath to the BLUE FOOTBRIDGE across St James Park Lake. Walk over the bridge to the other side and continue straight on the footpath to THE MALL SW1. To see St James's Palace, cross The Mall and walk up MARLBOROUGH ROAD SW1, turning left at the end. Retrace your steps back to The Mall and turn right.

Walk to the right of the Palace, turn left and walk up the right hand side of CONSTITUTION HILL SW1 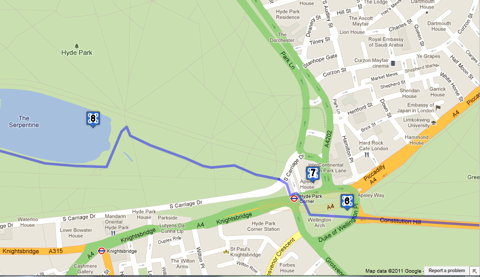 Continue up the right hand side of CONSTITUTION HILL SW1 next to Green Park to HYDE PARK CORNER W1. Cross the busy road, walk through Wellington Arch and follow the path right, crossing Piccadilly W1 to No 1 London, Apsley House. Turn around and entre Hyde Park through Apsley Gate.

In Hyde Park, cross the park road and bear right following the DIANA, PRINCESS OF WALES MEMORIAL WALK, into the Rose Garden. Follow the path up to the Serpentine Boating Lake. 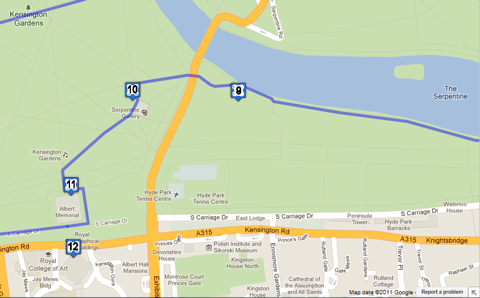 From the start of the Serpentine Boating Lake turn left behind the Serpentine Bar and Kitchen and walk around the lake (in a clockwise direction) to the Lido outdoor swimming area. Continue on the footpath round to the Diana, Princess of Wales Memorial Fountain.

Continue on the path past fountain crossing the park road into Kensington Gardens. Turn left on the path, then right into FLOWER WALK footpath. Follow this path past the Serpentine Gallery to the Albert Memorial. The Royal Albert Hall is through QUEEN'S GATE, just outside Kensington Gardens on KENSINGTON GORE SW7. 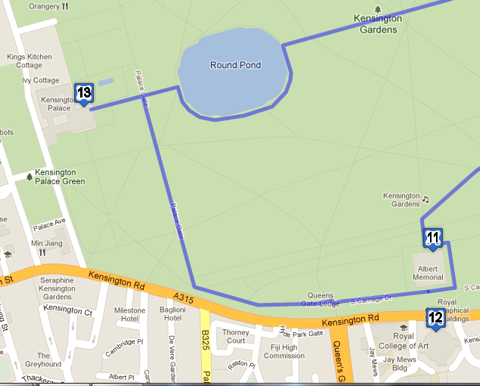 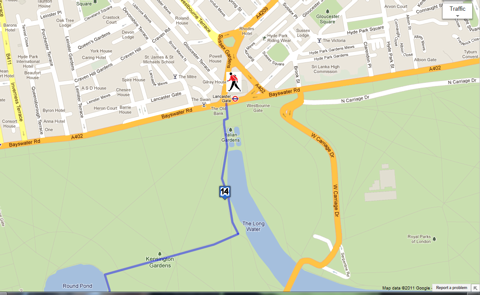 From Kensington Palace go straight across the BROAD WALK to the Round Pond and onto the lake, The Long Water. Turn left and walk up the footpath past Peter Pan Statue and Italian Gardens. Exit Kensington Gardens through MARLBOROUGH GATE.