Lloyd’s of London is the world’s leading insurance market where Names (members) provide capital and form syndicates to insure (underwrite) specialist types of risk. Lloyd’s was formed in 1688 by Edward Lloyd who owned and ran a coffee-house in the City near the River Thames.

In 1691 The coffee shop moved to Lombard Street where, from a pulpit, maritime auction prices and shipping news were announced.

Lloyd's of London building, designed by Sir Richard Rogers in 1986. 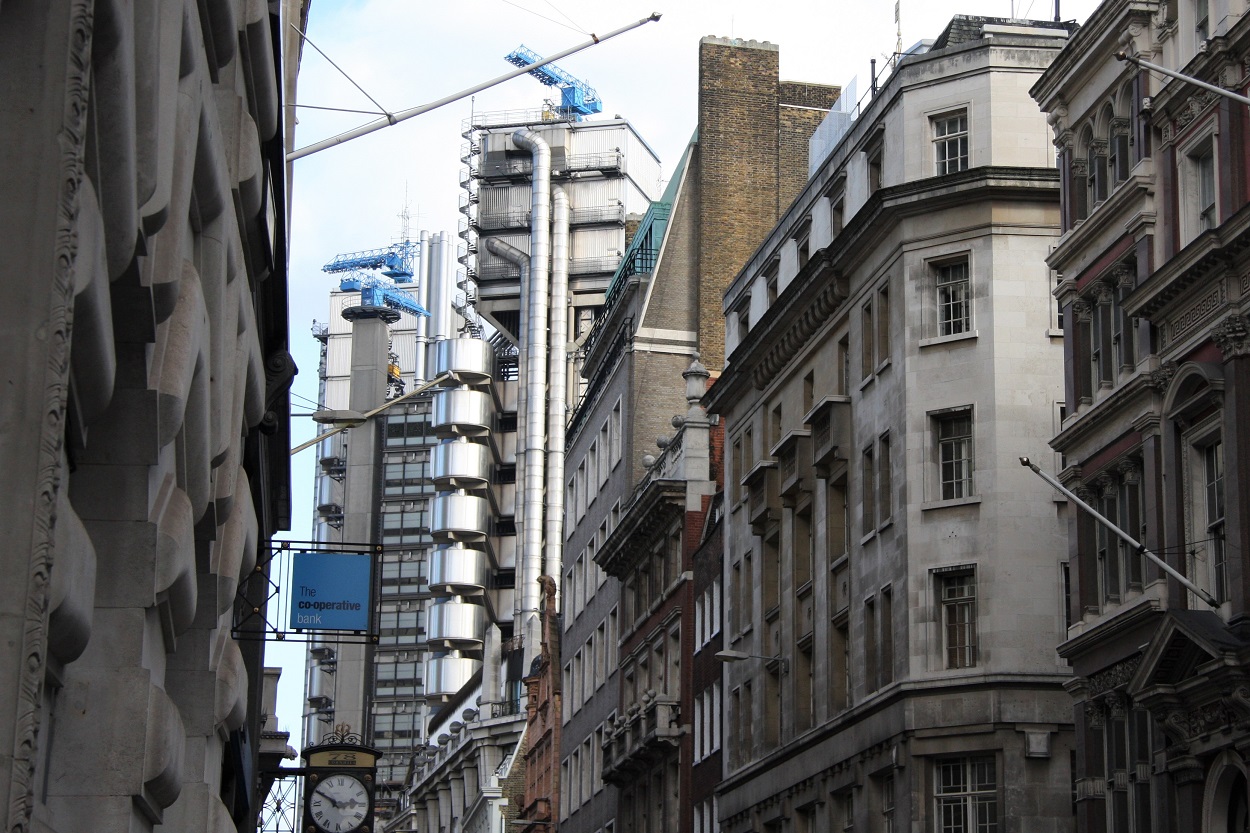 As London’s importance grew as a maritime trade centre in the 17th century, Lloyds Coffee House became a common meeting place for ship-owners, merchants and sailors who would exchange important information and arrange insurance, through Brokers, for their ships and cargo.

As his trade and network of contacts expended, Lloyd started to collect shipping movements from all over the world and publish the information in a news sheet, Lloyd’s News. Still published today, Lloyd’s List is the world's oldest continuously-running journal and was London’s 1st daily newspaper.

Lloyd's building services are on the out-side, maximising use of internal space. 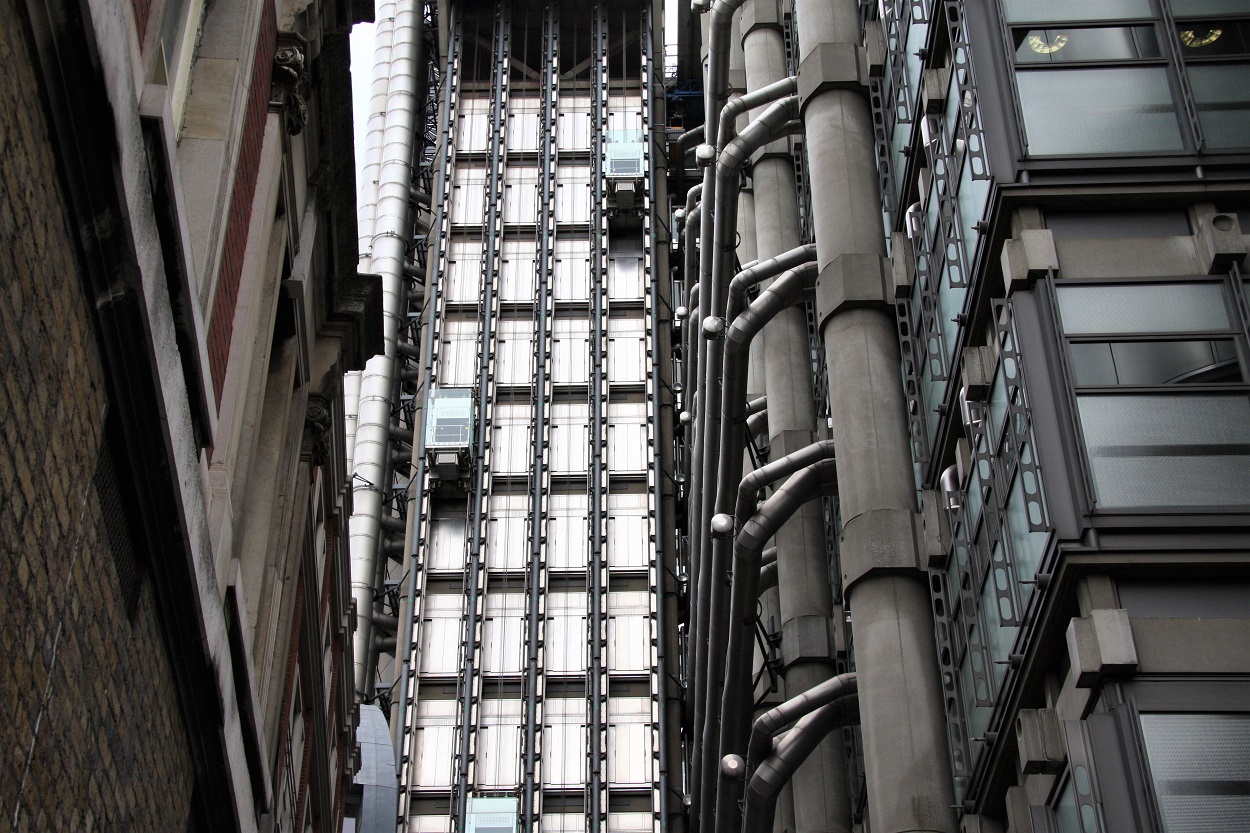 Lloyds of London is famous for its high-tech building which was completed in 1986. Designed by the architect Sir Richard Rogers, its unique design is internationally recognised. Like the Pompidou Centre in Paris, which Rogers also worked on, all the services and utilities; electrics, gas, water, heating, air-conditioning, waist and lifts run in pipes and ducts on the out-side of the building.

The buildings architecture, Structural Expressionism, was initially out of keeping with its historic surroundings, but less so today, as it sits next to 21st century sky-scrappers, the Gherkin and Willis building. 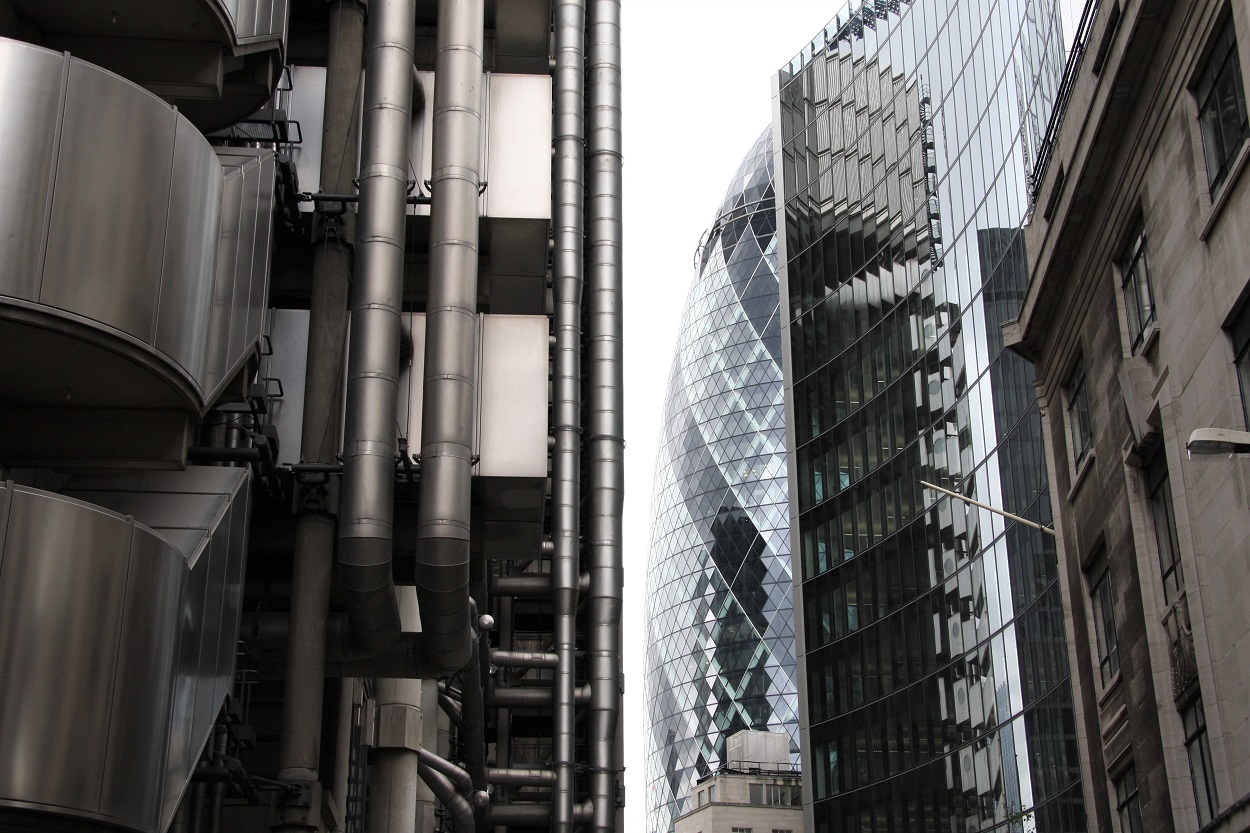 As the world-wide insurance business has grown Lloyd’s of London has needed to moved building several times within the City. Although the present building at No 1 Lime Street is less than 30 years old, it hides many historic and surprising treasures.

In the Underwriting Room is the Lutine Bell, which used to be rung every time an insured ship was lost. The bell was from the French frigate La Lutine which sank in 1799 with gold and silver bullion insured at Lloyds for £1 millon.

Roger's 'inside-out' design like his Pompidou Centre in Paris.

Lloyd’s Nelson Collection includes the 200 year old logbook from HMS Euralyus, an observation frigate at the Battle of Trafalgar, it describes events as they happened.

On the 11th floor, beautifully restored and reassembled from Bowood House’s dining room, is the Adam Room. Designed in 1763 by the influential Scottish architect Robert Adam, the classical stately home interior is a complete contrast to the rest of the high-tech building.

Lloyds of London is a working office and not open to the public.